Often with Leak Detection and Repair (LDAR) surveys, companies are stuck using traditional strategies that aren’t very efficient. In fact,despite recent technological advancements, many businesses seem reluctant to ‘take the plunge and embrace newer methods that would help them detect fugitive emissions in their operations. In this article, Terence Trefiak of Target Emissions Services discusses Optical Gas Imaging Camera (OGIC) technology for LDAR versus Method 21, and the AWP.

Method 21 (or sometimes called sniffing) is the most common LDAR method. First developed by the EPA, it uses hydrocarbon detectors connected to an aspirated wand to probe for emissions. However, this approach doesn’t come without its own drawbacks, especially when comparing to newer optical imaging techniques that are available today.

One of the drawbacks to Method 21 is the speed at which it takes to find leaks. Method 21 has often been compared to finding a ‘needle in a haystack,’ by having to inspect each piece of hay one by one as you must manually examine hundreds of different components to find one leak (or maybe not at all).  This process is tedious, repetitive, and costly. Optical Imaging allows the rapid screening of components. It’s much more efficient when it comes to finding significant leaks and is often more cost effective for the consumer. Essentially, it’s like using a magnet to find the same needle.

A M21 LDAR process typically starts with screening numerous components to get screening values (SV) in ppmv, then you apply correlations to estimate emissions rates (ER). Due to the difficulties of using a concentration number to correlate to a mass flow rate, you could end up with errors in the predicted leak rate of anywhere between -80% to over 10,000% in some instances. Alternatively, Optical Imaging provides a qualitative read of the size of leak, and accurately identifies the component from which the leak has developed. In the instance of ‘ghost leaks’ (incorrect component identified as leaking) OGI can save a lot of time and money by visually identifying the correct component to go fix first.

With optical imaging, companies can also scan components that were previously unsafe or inaccessible by employees. This means that you can obtain a complete assessment of leakage situations without compromising the safety of workers. Another advantage is the significantly reduced length of monitoring times as you won’t need a technician to check every single component manually. 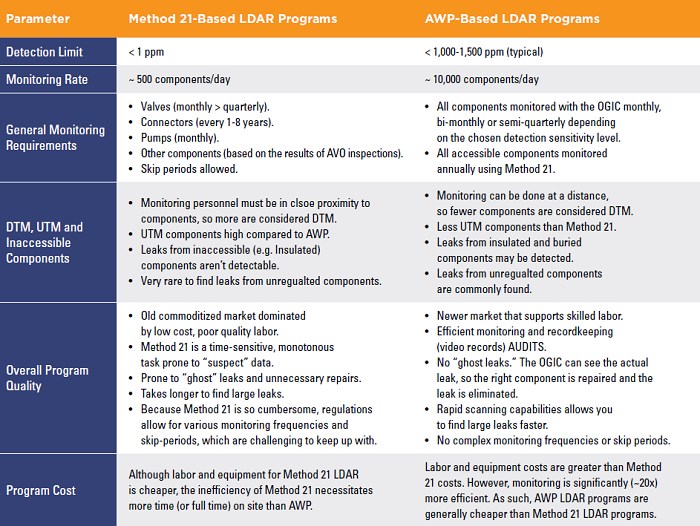