There are many benefits to using Belleville springs in or adjacent to valves for a variety of purposes. Particularly in ball valves, when Belleville springs are added to the gland and around the seat, they ensure that the bolt preload is retained to reduce fugitive emissions. By George Davet, BSME, Vice President and Chief Engineer, Solon Manufacturing Company.

The EPA defines “fugitive emissions” as “those emissions which could not reasonably pass through a stack, chimney, vent, or other functionally-equivalent opening.” In other words, a fugitive emission is an unintended leak or release of a pressurized gas or vapor. Leaks represent a significant impact on air quality and the environment.
Furthermore, these emissions can be both costly and represent an immediate health risk to humans exposed to harmful chemicals. Adding springs to a ball valve greatly reduce the risk of fugitive emissions as well as general seat wear.
Before examining the benefits of the Belleville spring on ball valves, it is important to understand the Belleville spring. Belleville washer, conical washer, disc spring, coneddisc spring, etc. are other names for the same product. It is essentially a washer with a conical shape that produces spring characteristics when loaded axially. The term Belleville is derived from the initial patent holder, Julian Belleville, who originally designed the Belleville spring to be used in valves.
Bellevilles are commonly described by their inside diameter (ID), outside diameter (OD), thickness (t), and deflection (h). Once these dimensions and the material are known, the load versus deflection may be modeled. As the spring is loaded axially, often it will deflect linearly until it is extremely close to flat. The load will then increase exponentially until it reaches flat. Low stress Bellevilles will exhibit a non-linear load versus deflection curve. Belleville springs can also be designed to provide an optimal spring rate for the performance requirements of the application. Requirements may include load versus deflection, loading at a given height, high cycle life, performance at elevated temperature, etc.
The ball seat can be live loaded with a Belleville to ensure that the load is within the proper range. Since these
loads are usually much lower than those used to seal packing stems or gaskets, the spring stresses can be lower. Some Bellevilles with very low stresses can produce a load curve with a rate of nearly zero. This means that as the spring deflects, there is little change in load. This is a desirable quality for a spring used in this application since a specific load can be maintained through a wide range of tolerances. The Belleville spring will keep the seat stress from falling too low which could result in a leak. In addition, it can keep the seat stress from being too high where the valve operating torque is unacceptable.

Floating Ball Valves
Many seat designs within a ball valve incorporate two Belleville springs. The first one is typically installed on the downstream side of the seat, with the other one behind the upstream bearing ring. Using two Belleville springs on either side of the seat can form a seal regardless of the flow direction. This allows for a uni-directional shut-off valve, used in high pressure applications, or a bi-directional shut-off valve, which allows for shut-off flow in either forward or reverse direction. Another benefit of using Belleville springs on both sides of the seat is to equalize the load, while also compensating for seat wear, due to pressure and temperature changes. There are two types of ball valves based on the ball type: floating ball valve and trunnion mounted ball valve.
Floating ball valves have a floating ball inside the valve body. The ball is able to move along the axis, but does not have any freedom to rotate against the stem. Belleville springs are utilized in this application around  the seat springs. When open, the ball drifts toward the downstream side and tightly pushes against the seat to ensure sealing reliability. Under the typical low to medium pressure application, seals are created by the Belleville spring-loaded seats pushing against the ball.

Trunnion Ball Valves
Unlike the floating ball valve, the ball of a trunnion ball valve is fixed. Trunnion ball valves are used in high
pressure applications and in large sized valves. The ball remains centered on the shaft within the downstream
Belleville seat spring and the upstream Belleville seat spring. As the pressure builds downstream, a Belleville spring is used on the downstream seat, creating a seal. The Belleville spring on the upstream seat also flexes with the pressure movement of the seat and maintains the upstream seal.
Under extremely high temperatures and pressures, such as in nuclear applications, the use of Belleville springs compensates for the differential thermal expansion of the internal parts at elevated temperatures by absorbing the heat expansion. They provide the initial sealing force in applications relating to gradual building pressures. Therefore, Belleville springs on ball valves ensure that the valve will not get stuck and can open and close with ease under these abrasive conditions.
Live Loading on the Gland Follower
One common application for Bellevilles in valves is live loading of packing. The term “live loading” means using a spring to maintain load on a seal. Most of these valves utilize studs or bolts to exert load onto the gland follower, which loads the packing. As the valve is operated, some of the seal material is lost during each operation. This material loss is called packing consolidation. High temperature and thermal cycling can accelerate packing consolidation. As this occurs, preload is lost on the seal. Once the preload falls below a certain threshold, a leak will occur. Since the stretch in the stud is small, loss of preload can occur quickly.
Belleville springs are used to maintain load on the gland follower. They are typically arranged in a stack on the stud to increase the elasticity of the system. Seal materials are lost over time; however, the live loaded stud will lose less load because the deflection of the spring stack is significantly greater than the stretch of the stud alone. If load is maintained on the seal, a leak is much less likely.

Best Materials of Belleville Springs to use on Ball Valves
One would think that the obvious choice would be to match the Belleville material to the valve body material. However, this rarely is a good choice. Bellevilles are highly stressed parts while the stresses in the valve bodies are much lower. Therefore, it is important that the spring material has a high yield strength. This greatly reduces the candidate materials. In addition, the spring may be exposed to high temperatures and/or corrosive media. The spring material must be capable of withstanding the temperatures and environment under stress without failure over time. 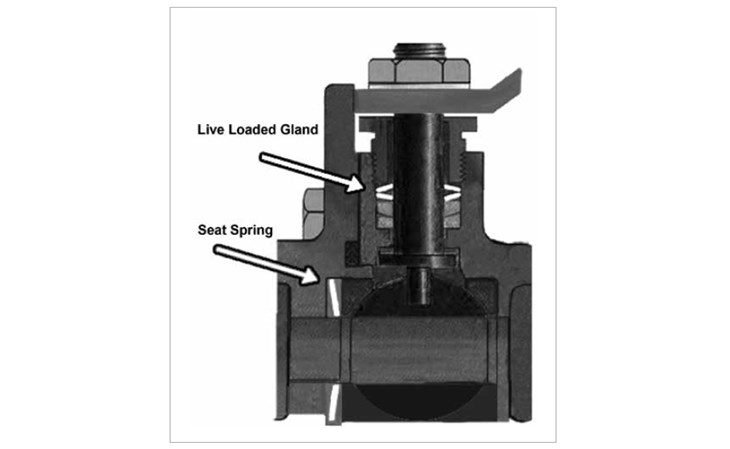 Below are some factors to consider when selecting a material:
What are the minimum and maximum temperatures?
This is not necessarily the process temperature. The springs may be removed from the process and so the temperature at the spring may be different from the process. Once the temperature is known, the list of candidate materials will be narrowed based on the effect the temperature will have on the mechanical properties. Since each spring is designed based on the material properties, it may be necessary to change the design to accommodate the temperature extremes.
What is the environment?
Any time spring material is highly stressed, corrosion assisted failure is a concern. Some materials are more susceptible to cracking in certain environments than others. As expected, the best alloys for highly corrosive environments are often the costliest. However, in some cases springs may be protected (plating) or the design may be altered to reduce stresses to an acceptable level.
How fast are the parts needed and what is an acceptable price?
Many designs may not be available as a standard. This will always increase lead time. In addition, some raw materials may meet all of the performance requirements but will be unacceptable due to cost or lead time. These are factors that should be considered at the design stage.
Conclusion
Ball valves may leak due to a variety of reasons. One of the most prevalent causes is due to a loss of bolt preload. When Belleville springs are added to the gland as well as the seat spring of a ball valve, they chiefly ensure that the bolt preload is retained to greatly reduce fugitive emissions. In addition to maintaining the load, the addition of Belleville springs on a ball valve can extend the life of packing, improve performance, and reduce the overall cost of ownership.
REFERENCES:
Boyson, Scott. “Do Your Valves and Packing Technology Meet Current EPA Requirements?” Valve World Americas, September 2012: 18.
Drago, Jim. “Graphite Valve Stem Packings can Reduce Fugitive Emissions.” Valve Magazine, April 2009: 26-31.
Emission factors are from Protocol for Equipment Leak Emission Estimates, EPA-453/R-95-017, Nov 1995, and equipment counts in Table 3.2.
Spilker, Steve. “Ball Valves in Power Plants.” Valve Magazine, Winter 2012: 27-34.
Swagelok. Ball valves: General Purpose and Special Applications. www.swagelok.com.
Vatac, Inc. Floating Ball Valve and Trunnion Ball Valve. www.vatacvalve.com.
Volk Flow Controls, Inc. Volk Metal Seated Ball Valve. www.volkvalves.com.
About the Author

George Davet, BSME, MBA is Vice President and Chief Engineer for Solon Manufacturing Co., a manufacturer of Belleville springs and pressure switches in Chardon, Ohio. George has written and published numerous articles on the application of Belleville Springs. He can be reached at gdavet@solonmfg.com.
Fugitive Emissions Journal Newsletter