Fugitive Emissions are emissions of gases and/or vapors due to an unanticipated leak from pressurized equipment such as valves, pumps, compressors typically in a Chemical, Petrochemical, LNG or Refinery applications. Emissions from Refineries and Chemical/Petrochemical plants can be broadly referred as Volatile Organic Compounds (VOCs) emitting in the atmosphere in plant applications or Hazardous Air Pollutants (HAPs).

Knowing how to select valves that will meet or exceed volatile organic compound, fugitive emission limits are critical as the costs are exorbitantly high if an operator fails to meet the requirements. Need for Fugitive Emissions is as shown in Figure 1.

As per figure 2. by industry scholars and experts, fugitive emissions in an energy producing plant are highest from valves followed by pumps, flanges and other equipment.
The most common industry codes and practices on emissions are: 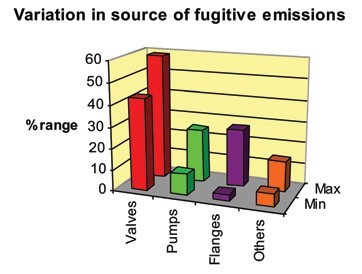 The outlined test conditions and parameters are listed in Figure 3.
While the standards noted in the above chart offer a solid guideline, the community has hesitated to apply them across all businesses. While the change in the Environmental Protection Agency’s (EPA) policy is in review, business is as usual in rest of the world, where Helium is commonly used.
While valve emissions have been reduced in North America, they have either increased or not changed in the rest of the world. Current EPA guidelines in the U.S. have driven reduction in valve emissions by handling issues such as: 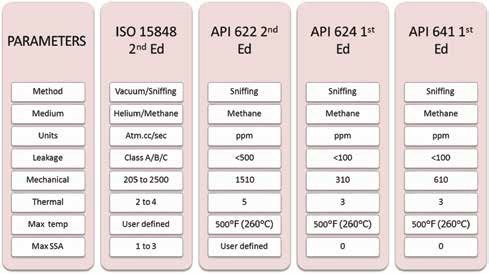 End-users are working closely with the standards organizations to develop mandatory requirements on API 622, API 624, API641 & ISO15848 Part 1&2, such as maximum stem-to-seal tolerance allowance (finishing), criteria on leakage rate/s, maximum temperatures, minimum temperatures, leakage class, cycles, etc. In fugitive emission testing, the braided packing has been successful, which is cost effective for retrofitting existing and stock valves. Braided packing can be installed during shutdown or replaced during a valve refurbishment program.
These packings have been in use since the 1990s. Typically Fugitive emission performance was good at 200 C, until longer test periods at higher temperatures resulted in the binders (chemicals used in producing packings) evaporating. Braided technology has improved since then, but binder disintegration above 200 C in a test period of six hours remains an issue.
The use of braided packings for new valves is not commercially viable or practical compared to traditional dieformed graphite lantern rings. Alternative packings (specially engineered) for new valves are limited to API 602 forged steel valves (valves less than two inches).
With regulation requirements, users must now pay careful attention to the costs of compliance. For example, an engineered solution, such as special braided packing, is about 25 percent more expensive than traditional packing. However, these costs can be offset by and should be considered in the light of:
Because the requirements may be interpreted differently depending on the end users’ locations, the industry is still in partial acceptance of fugitive emission requirements and the use of braided packings for controlling these emissions.
The FutureDebate continues about the development of fugitive emissions regulations from the EPA, API, ISO, ISA, NACE, ASME, and many other organizations. End-users are also requesting consistent research and improvement on current practices, including testing and approvals.
Conclusion
Fugitive emissions are chemicals in physical form that can leak unanticipated within an installation. Valves account for more than 51 percent of fugitive emissions, and greenhouse gases (GHGs) are part of this. Leak screening should be completed on accessible components using a portable organic vapor analyzer in accordance with U.S. EPA Method 21 or using alternate methods that provide an equivalent result.
Fugitive Emissions Journal Newsletter