The Valve World Asia team was filled with high expectations and curiosity as they prepared for their interview with Mr. Ma Zhigang — a General Manager highly praised by his industrial peers. Introducing the sealing industry from his own perspective, Mr. Ma Zhigang discussed the ‘aesthetic feeling’ of engineering, changes in the market, technology know-how and competition. By Laura WANG

‘Aesthetic Feeling’ of Engineering
Graduated in 1988 from East China University of Science and Technology, majoring in the Chemical Machinery, Ma Zhigang started his career with SUFA Technology Industry Co., Ltd., then joined the Taicang Inspection Institute of Boiler and Pressure Vessels before beginning his postgraduate studies. In 1992, Ma Zhigang stepped into the field of petrochemical facilities and equipment purging. When learning about petrochemical equipment and related processes, he found that there were thousands of detachable joints within all kind of process facilities and each joint needed to be sealed. It was during that time that he recognized the importance of sealing in the process industry. After years of hands-on practice on the production line, Ma Zhigang decided to complete his postgraduate studies in the field of sealing material.
Before his graduation he established his own company, BMC Sealing. Many would describe Ma Zhigang’s professional background as rich and spectacular, but none of the changes in his career have compromised the close connection he has with the sealing industry. “I have been working on sealing technology for nearly three decades. A good practice for the sealing industry is to follow three rules: first, base decisions on theory, verify by the standard and aim at real-world projects. The essential approach is to coordinate these three rules for mutually beneficial efforts, then an effective research platform can be set up on that basis. Secondly,a highly capable and consolidated R&D team must be built up. Finally, network and cooperate with universities and authoritative institutions. When all three of these approaches have been realized, a sealing company can provide quality products, good service and effective support,” said Ma Zhigang.
During the interview, Ma Zhigang mentioned the ‘aesthetic feeling’ of engineering more often than business strategy. He said, “At first it is just an idea. You draw the blueprint and then create the prototype. If it finally passes all necessary tests and proves that your idea is soundand practical, you will realize that the whole process is a fantastic experience. I cherish what I specialize in. That is how I brief my career.” 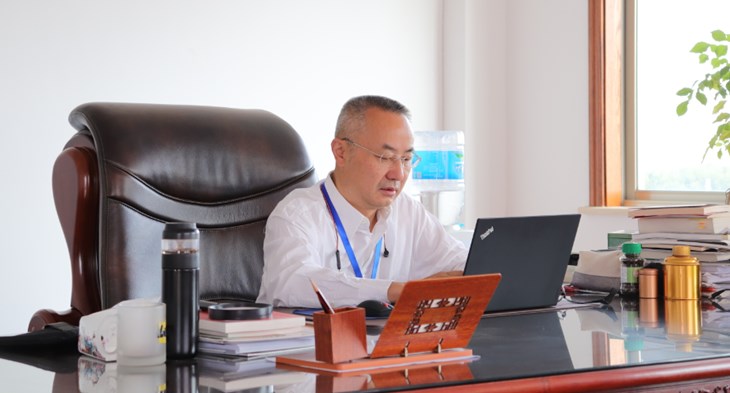 The Sealing Industry – from ‘Invisible’ to ‘Undetectable by Sniffing’
When discussing changes in the sealing industry, Ma Zhigang explained: “The conventional criteria applicable for sealing in the past was simply ‘leak free’. However, ‘leak free’ is just a rough description based upon the sensitiveness of the apparatus. To be more specific, the term ‘leak free’ refers to ‘free of visible leaking’ as judged by human eyes. Nowadays, the terminology we use for leak control is ‘fugitive emission’. The new criterion for ‘leak free’ has changed to ‘undetectable by sniffing’. Such a shift is driven by the changing needs of modern industries and is powered by the development of sealing technology. Technical advancement has propelled change in the sealing industry in three areas, with the advancement in sealing materials as the most critical. Many high-tightness, low-leakage materials have been developed in the past two decades, and the advancement of metal materials and upgrading of valve packing technology has also happened. Secondly, improvements in sealing design elements have helped a lot. The improved design is called Metal to Metal Contact and its origin is the European Sealing Association. It spread to China in the end of the 1990s along with nuclear power technology. The new design significantly improves the performance of sealing material for joints, and partly prevents the risk of sealing stress caused by thermal cycling. More than that, the new design also fuels the development of structural design. The third area is installation techniques — transformed from rough tamping based on experience, to a precisely controlled operation. Such technical transformation has much influence on large-scale, critical equipment. For example, fastening torque is given to the stuffing box bolt. There has also been a shift in peoples’ perspectives. Operating staff have realized that leaking at a joint is not solely related to the sealing element itself, the installation and structure design are also involved. ASME PCC-1 2011 has detailed installation procedures and guidelines. These are some of the things that reflect the changes and upgrades happening in the sealing industry.”
Outside of the changes within the industry, state policies and laws also have great influence on trends and changes. Ma Zhigang continued, “In recent years, the Environmental Protection Agency has issued rules on VOC fugitive emission control. The definition of fugitive emission is the unexpected or uncontrolled emission of air contaminants. Such phenomenon most likely happens at the packing/sealing area of valves. The supervision department has imposed a quota of emission for petrochemical enterprises and any excessive emissions shall be punished by fine. The quota is strict and has decreased significantly in recent years. Sinopec has explicitly defined emission as ‘accident’. Along with the ever-tightening requirements of policies and laws, companies must keep working on upgrading technology in order to maintain long term development.” Ma Zhigang also mentioned that on-going cooperation with foreign companies helps promote further development of the domestic sealing industry in China. “There is a gap present, but there is room for advancement. We consider the specified goal as a kind of power for our development,” added Ma Zhigang.