With the ever-changing economy and concerns of global warming, many modifications to manufacturing and process industries already have and are about to take place; several of which will be initiated and controlled by various governmental bodies. One of these changes is the finalizing of Appendix K for the downstream sector, as it has already been adopted by the upstream and midstream sectors.

The History of OGI
In 1983 the United States Environmental Protection Agency (USEPA) finalized a component-by-component screening method which uses portable hydrocarbon analyzers (generally with a Flame Ionization Detector such as the phx42 FID); this practice is now commonly referred to as Method 21 (M21). This method involves placing a probe at possible leaking interfaces, such as flanges and valve packing, in order to view the potential emissions in a parts per million (ppm) value. If the value displayed by the probe exceeds a predetermined threshold, a leak is recorded and the equipment must be repaired.
The industry was largely unchanged for nearly 20 years. Starting in the early 2000s, however, many important transitions took place. For example, in 2002 a study was conducted by Clearstone Engineering which found that only a small percentage (roughly 2.4%) of all equipment in hydrocarbon service utilized M21 to locate and identify a leak. The year 2004 bought about the Optical Gas Imaging Camera ‘shoot out,’ which was put on by the USEPA. This shootout consisted of four infrared cameras, which had two active systems using laser beams – one using a spectrally variable lens and David Furry’s passive IR camera, the Gas Hawk, equipped with a special cold filter. The Gas Hawk found the most leaks, the smallest leaks, and was quicker than the other cameras developed at the time. Then, in 2005 the first commercially available camera, created by FLIR, came to the market for VOC leak detection. This camera was named the GasFindIR.
While the cameras saw great adoption rates, and the entrance of many new camera manufacturers to the market, such as Opgal, OGI was normally done in an addition to Method 21, during startups and shutdowns, as well as odor investigations.
Fast forward to 2008, and the industry has issued many complaints to the USEPA about the cost and inefficiencies of M21. Seeing an opportunity to find large leaks faster, the USEPA responded by issuing the Alternate Work Practice (AWP), which allowed the use of OGI instead of Method 21.
As a whole, the industry was quite excited with this new alternative to M21, however in the final governmental ruling it found that USEPA did have concerns about OGI’s ability to detect small leaks and report emission amounts. It is for this reason that the USEPA included an annual M21 requirement for anyone who uses the AWP. With this addition, a complete lack of adoption was found within the industry. 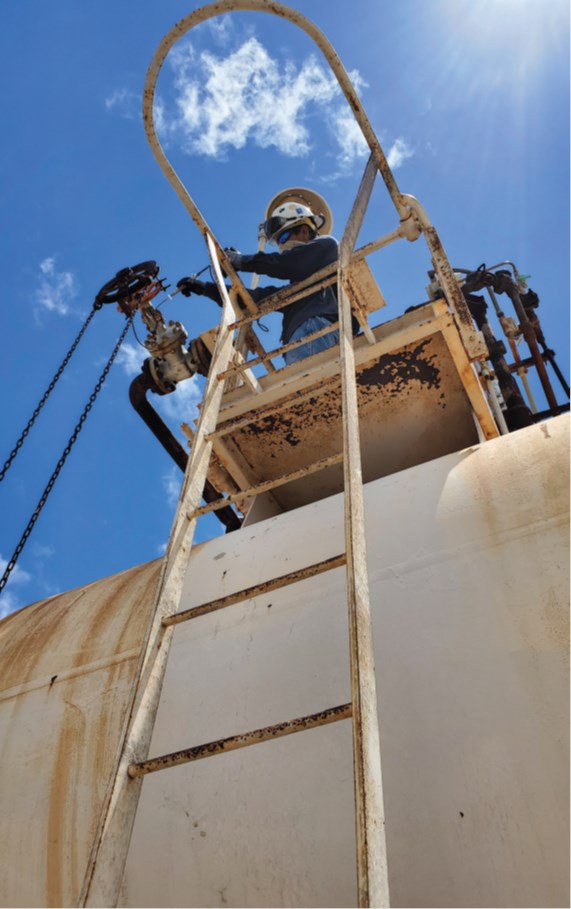 As 2012 rolled around, the Uniform Standards were proposed; this standard would have allowed the use of OGI technology in lieu of M21, if all requirements of Appendix K were followed. The Uniform Standards failed to materialize.
Also in 2012, NSPS OOOO (OOOO) was released, which established emission standards and compliance schedules for VOC emissions from onshore natural gas facilities that required the use of M21. Technological advancement was later made in 2014 when the FLIR GF320 brought an improved High Sensitivity Mode that allowed even lower levels of leak detection. In the same year, Colorado Regulation 7 was implemented, a state regulation that allowed the oil and natural sectors to utilize either M21 or OGI for compliance.
In 2015, the Eastern Research Group (ERG) developed a technical support document which provided background, technical analyses, experimental results, and other supplemental information to support the development of OGI protocols.
Then one of the biggest game changers took place in 2016 with the development of NSPS OOOOa (also referred to as simply OOOOa), an extension to Quad O. For the first time, this extension included time regulations of methane emissions in the natural gas sector. 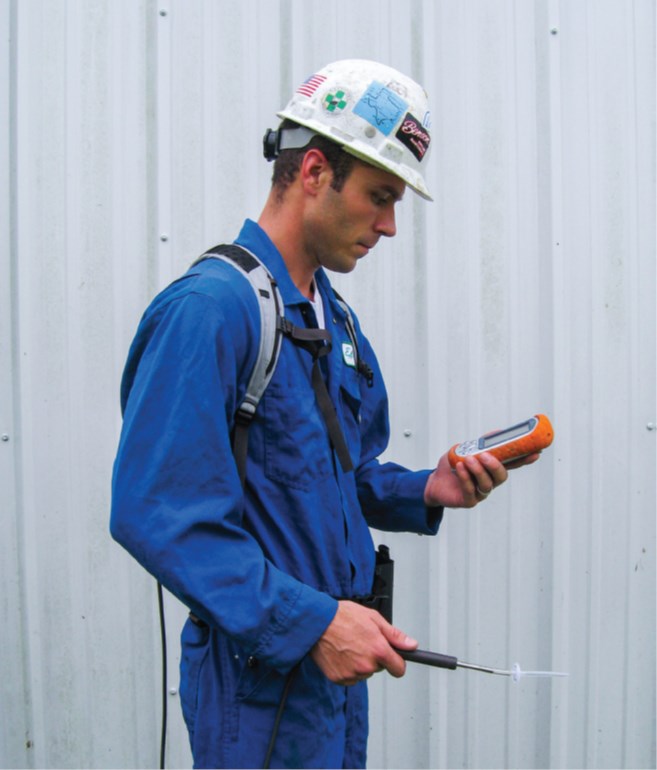 About LDARtools
Originally founded as a service provider called Environmental Analytics, in 2007 the company became the official “EA Research Division.” Now called LDARtools, this company has always been dedicated to ensuring that consumers continuously benefit from technological innovation. The company facilitates leak detection and repair programs globally and across the United States. It provides hardware, equipment, proprietary software, and innovative business methods to their diverse customer base. These services are combined with extensive experience and insight, as the company has positioned itself as an asset to the greater LDAR community.
What is Next for Appendix K?
Most recently, in November 2020, an Optical Gas Imaging Stakeholder workshop was held. In opening this workshop, Penny Lassiter (Director Sector Policy and Programs Division USEPA) shared that the current focus of USEPA was the use of OGI technology within refineries. The use of technology would be qualified with procedures as an appendix to 40 Code of Federal Regulations (CFR) Part 60. It was indicated that these procedures would, at a minimum, consist of: minimum specifications for OGI equipment, camera operators training requirements, survey procedures, field conditions upon survey results, recordkeeping, and reporting.
So, what is Appendix K going to look like? Appendix K, based on what has been communicated thus far by USPEA, is going to be similar to OOOOa, though it will still include some noticeable differences. Appendix K is intended to be a method more than an outline for site specific monitoring. While it cannot be determined what the final Appendix K will be, in investigating existing OOOOa requirements the following details prove to be vital:

Written Procedures
• Daily OGI camera verification checks
• Maximum wind speed threshold documentation
• IR camera survey procedures
• Ensuring adequate thermal background
• Adverse monitoring conditions
• Interferences (false positives)
• Thermographer experience and training requirements
• Maintenance and calibration requirements
• Repair verification with OGI
Recordkeeping and Reporting Requirements
• Thermographer experience and training
• Temperature, conditions (cloudy, clear, raining, etc.), max wind speed during the time of the survey
• Type of IR camera used
• Any deviations from the monitoring plan
• Number of components and type of components for which emissions were detected
• Digital photo or video of each component that had emissions detected that could not be repaired during the monitoring survey
• Number and type of components not repaired
• Number and type of DTM and UTM components monitored
• Successful repair dates for each component
• Number and type of components placed on Delay of Repair (DOR), along with an explanation for each
• One or more digital photos or videos from each required monitoring survey with date and GPS coordinates
• A database/record keeping system such as Chateau by LDARtools*

*What is Chateau by LDARtools? 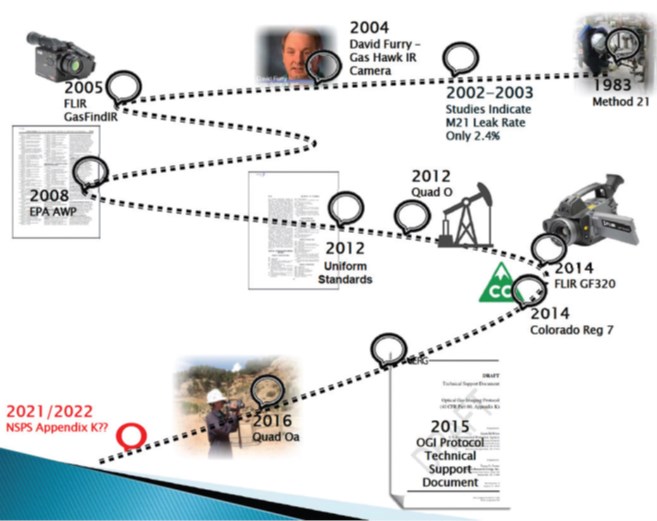 For consumers looking to manage their LDAR system, LDARtools Chateau database is a must-have. This software includes many key features and abilities, including but not limited to:
• Support for an optional array of 103 different component properties;
• 35 fully customizable picklists;
• Automated “Next Action” tracking on all open leaks;
• Integration of ALL LDAR data: techs, certifications, cylinders, calibrations, etc.;
• Password-protected access to customized Rule Specs 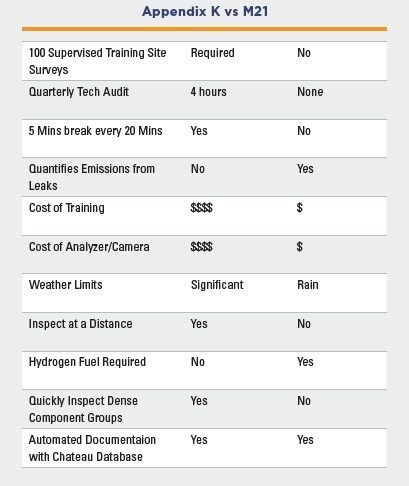 One of the key items included in the draft of Appendix K is Table 14-1. This table sets the inspection time and image framing requirements. Industry professionals once thought that OGI would be much faster than Method 21, as reports of the inspection of thousands of components per hour were common. Still, there was one question unanswered: How close does a technician have to be to the component? It is now clear that simply scanning a unit and checking it off is not going to be acceptable. If this table is included as currently written, that discussion will be finally put to rest. Are there times when dense groups of components can be inspected quickly? Of course, but that is likely to be the exception, not the rule. 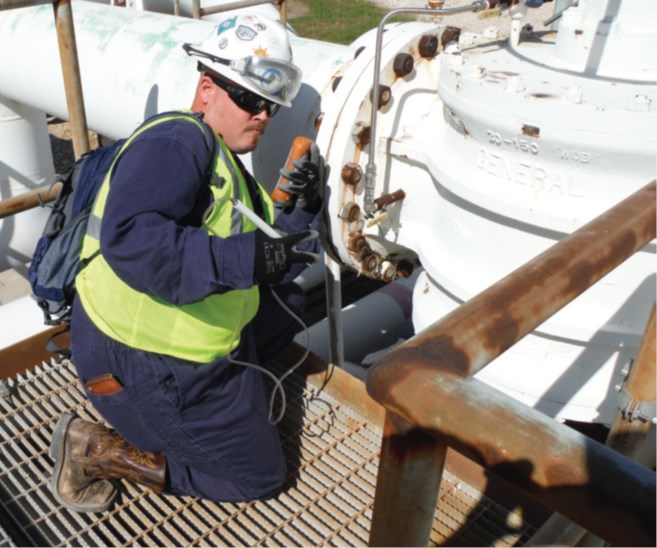 With 2021 coming to the end, the industry will hopefully see the draft version of Appendix K available for public review. Since 60 days is generally allowed for public comment and revisions, it may be safe to assume that the final version will be publicly accessed sometime in 2022.
In Conclusion
While there are still many unknowns, it is likely that the best use of Appendix K will be to inspect Difficult to Monitor, due to elevation components, (DTMs) and Unsafe to Monitor, due to hazards (UTMs) components on the required schedule. As the camera is much more expensive than a phx42 FID and the complexity of camera operation, training, and documentation is significant, the implementation of this process would reduce the cost of manpower, scaffolding, JLGs, and more importantly, improve the safety of a Leak Detection and Repair (LDAR) program.
The industry’s original goal of significantly reducing the cost of Leak Detection and Repair programs is probably still a long way away. After all, EPA’s current mandate is not to reduce cost of compliance, it is to reduce emissions.
Lastly, before any adoption, the facility’s permits may hinder the change to fully adopt Appendix K. Even if the overall goals is only for DTM and UTM components, permit modification may have to be submitted and approved. This can take multiple months, to even years, to receive the acceptance.
About the Author
Kevin Moses started as a monitoring Technician with Environmental Analytics, in 2003 working at the Dow site in Texas City. Kevin has been instrumental in a wide array of other innovative projects including software, calibration and infrared camera applications. He is a named inventor or co-inventor on six patents that have been issued by the US Patent office. As the Director of Operations for LDARtools, he has contributed to the development of virtually every piece of hardware and software that the company offers. Just as importantly, he has been the driving force behind the development of important client/business relationship around the world, most notably in Taiwan and China.

Bronson Pate is a Client Relationship Manager with TRICORD Consulting, LLC. Bronson is an LDAR Subject Matter Expert with more than thirteen years of professional experience within the industry. He has participated in and/or led over 275 third party LDAR audits and has worked with multiple facilities to develop LDAR programs both domestically and internationally.